The moment we have all been waiting for...

Passing another week here and we are trucking through all of the challenges. This past week wasn’t too busy. It is what we call a normal week. We did lessons, contacts, etc. Only a couple of major things happen this week.

One happened on Thursday. Thursday we had a meeting with Elder Aidukitis of the Seventy and Presidency of the Area. It was a great meeting. The first thing he said to us was “The Lord is very happy with you guys and the success you have been having, but he is not satisfied.” Our mission is one of the highest baptizing in the area and for him to say that was like, whoa. But when you really think about it, he is obviously right. The Lord wants everyone to come unto Him. If He was satisfied, then there would be no reason for me or any other missionary to be out in the mission.

So from that point on, he just laid down the law on how we should be working. A couple of rules he set were, we can’t go to sacrament meeting without an investigator, we cannot miss sacrament meeting, and we have to baptize every week. Just some of the few rules that he gave us. It was really crazy to hear. The mission is really cracking the whip harder and I like it. It is a new challenge to overcome. Nothing like having a new goal to meet. This next week we are going to see if we can baptize someone. There is a possibility that we can so we are going to work hard for that. We also have a baptism date for the 20th of this month also. We just set that last night which is the other amazing thing that happened but I’ll get to that in a sec.

Elder Aidukitis had everyone that had baptisms stand up. He immediately called on me and asked how many I had baptized. My knees were shaking like crazy and so I said 4. He said that was excellent and then he asked what our goal was and I said 5. My companion and I actually put 3 at the beginning of the transfer but something came out as five. He then told me with his finger pointing at me, you are going to reach it. That put me in awe. I can’t really describe or tell you what happened because there are no words for it. 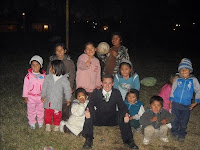 Elder Pickett and some of the Bolivian children in the area

That is what happened on Thursday. We are now going to skip to Sunday night. There is a boy named Nahuel who is 9 years old. His mom and sister got baptized in February but he didn’t get baptized. Well, the missionaries had been passing by and trying to help him to be baptized. He always said that he wanted to get baptized next week, or the week after, etc. So finally we went to his house last night to talk with the mother about this(we should have done this in the beginning). Come to find out, Nahuel’s sister who got baptized a couple months ago, didn’t want him to get baptized. That is one of the weirdest things I have ever heard in my life. So we then spent the next half hour explaining to the mom and sister that he needs to get baptized because it will do him good and it will bless him in his life. We also told them that he will be able to make decisions with the help of the Holy Ghost and he will make right decisions. So after explaining all that, she then said that she had family from out of town coming and she wanted him to be baptized when they were here because they aren’t members. In the end, we now have a baptism date for the 20th of June. After months of working with him, all we had to do was talk to the mom. Oh, and he agreed to baptized on that day also. Almost forgot to mention that part. So that was my missionary type week. 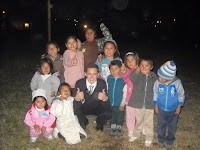 Now on to the other important business: Mundial. Friday is the first game of the biggest world wide event ever. South Africa and Mexico. I am hoping South Africa wins because for two reasons. One, I do not like the Mexican National team(I am half Argentine and half from the USA), two, I want to see the home team win a game. Now, besides the beginning of this beautiful time of soccer, we also have Argentina and the USA playing Saturday. I want photos and videos of you guys just going crazy. I want to see if you guys are more crazy than the Argentines. I don’t think you can be so prove me wrong. I already have my Messi and Tevez shirt ready. I have my flag hanging out and I am just so totally ready for Argentina to do what they did in 1986. It is a Pickett tradition. Father in Mexico in 86 and we win. Son in Argentina in 2010 and..... we win? Who knows! Every store is selling world cup everything, every... store. I love it. It’s like I’m living in my own soccer dream.

Well, I have nothing else. Thank you Mom, Dad (kinda lol), and Abuelita y Grandpa for writing me. Everything is going great here in Argentina. Thanks mom for package number two. I already drank all the hot chocolate. JA! I love you all. Until next week...

Love,
Elder Pickett
Posted by rpp at 8:30 AM