The morning of August 24th, we woke up to a phone call from Allen. He was calling from Miami to let us know that he had arrived in the USA safely. We were ecstatic to hear that he was once again on "friendly territory." I told him to quickly go and check on his next flight to make sure that he was checked in and had a seat. I asked him to call us back as soon as he was checked in. An hour later he called us and said, "I have bad news, my flight is cancelled." We thought he was kidding so we pressed him and he said that he was serious. He asked what to do. We were in shock. I called Church travel and they confirmed that his flight was cancelled and said they would re-schedule him for the next available flight, the next day! Jen was about to go ballistic so we asked Allen to go and see if they could get him a flight going elsewhere. He did go and speak to the desk people and they got him on stand-by for a flight to Minneapolis. He checked into that flight and waited nervously for his name to be called. We were even more nervous because we didn't know if he was going to make the flight or not. When the flight departed we braced ourselves for the "I didn't make it" phone call but it never came. We crossed our fingers and waited for a couple of hours. Allen called us from Minneapolis and said that he made it there and the chances looked good for him to make the last leg to SLC. Sure enough, he made the flight and eventually landed in SLC, 4 hours after his original time. Those 4 hours seemed like an eternity for us. We went to airport and were joined by Claralina and her kids, also Saul and Simon, my friend from England who arrived 10 minutes before Allen. We waited in Terminal 2 with a homemade sign, balloons, Argentine soccer jerseys, etc. We nervously scanned every person coming down wearing a suit and tie. After what seemed like an eternity Jennifer let out a scream and we knew what she saw. We all looked up and there was Allen coming down. We all cheered. 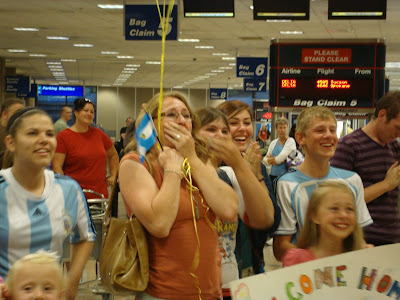 The first sight of Allen Marcos ran up and met him at the base of the escalator and got the first hug. Then one by one we took our turns hugging him. It was quite an exciting moment for all of us. We went to look for his luggage but the suitcases didn't make the flight. He filled out the necessary paperwork and then we went home. 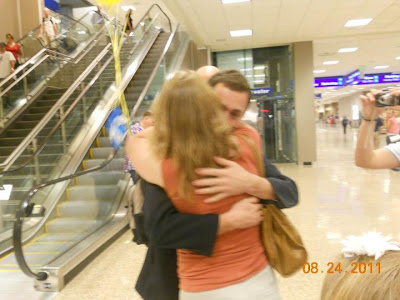 Jennifer gets her hug 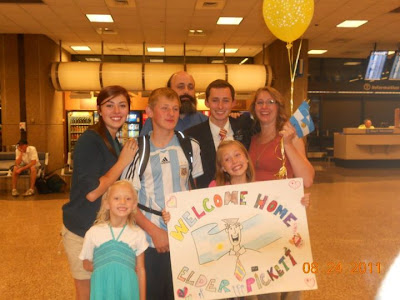 The family together again President Hall came over about 30 minutes after we got home. He asked to interview Allen but he asked to do it in front of all of us. So Allen stood and answered questions from President Hall regarding his mission and his growth. For 30 minutes Allen bore fervent testimony of the power of the Atonement and how he was becoming more Christlike. He bore testimony of the importance of continuing our growth. By the time he was done we were all in tears, grateful for the wonderful spirit that was in our home. President Hall then asked for private time with Allen so they went downstairs to talk. They spent 10 minutes alone and then they returned and our elder Pickett was once again Allen Pickett. What a sweet experience. 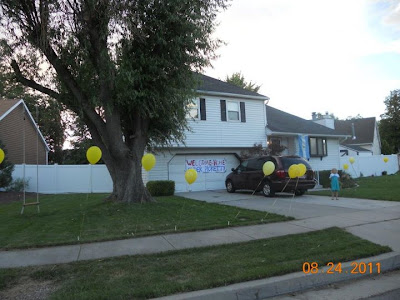 Decorated House Allen spoke in church the following Sunday and we had a family and friend get-together after the block. Very few stuck around for that as they are more accustomed to leaving church after Sacrament meeting. We had a great time with those that came by to visit. Allen is now attending Salt Lake Business College on a returned missionary scholarship.
Posted by rpp at 9:47 PM No comments:

This is taken from the blog of President and Sister Carter and pictures sent to us by Allen:

A pastor is a shepherd in Spanish. In our mission, a pastor or rather “the pastores” are the missionaries that are just completing their mission going off into another field. Since downtown Buenos Aires, is not part of our mission, we have a special day for the elders to get to know the city from whence the name of their Province and Mission came.

Today’s tour started in Plaza de Mayo where we learned a little about the history of the capitol and viewed some of the buildings surrounding the plaza including The Casa Rosada and the Catedral Metropolitana. 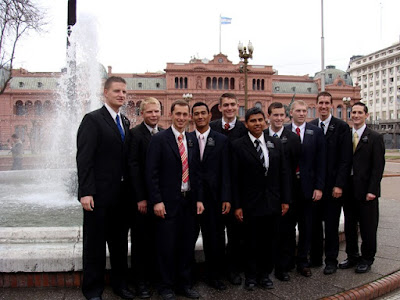 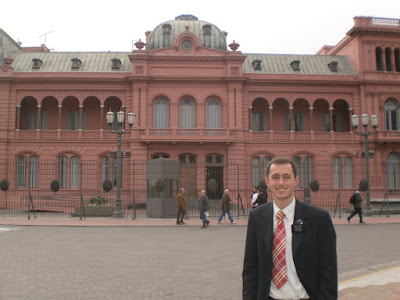 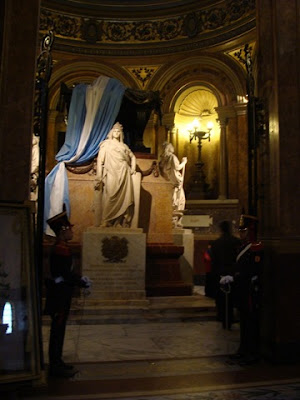 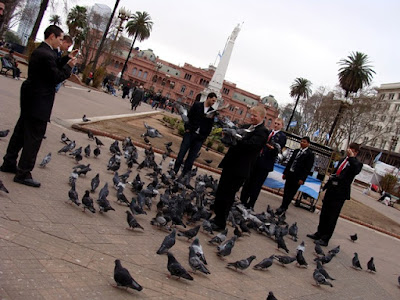 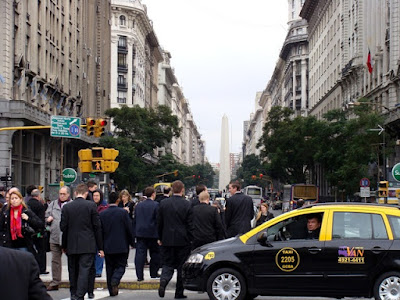 We learned about the 3 million immigrants that came to the southern quarter of Buenos Aires and took a drive through St. Telmo and stopped off in La Boca. The immigrants used discarded paint and materials from the shipyards to make their homes. 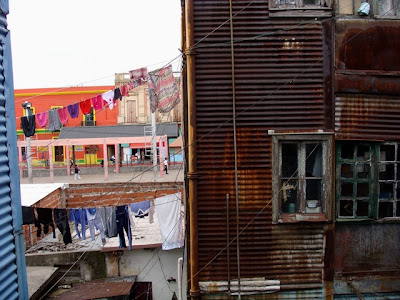 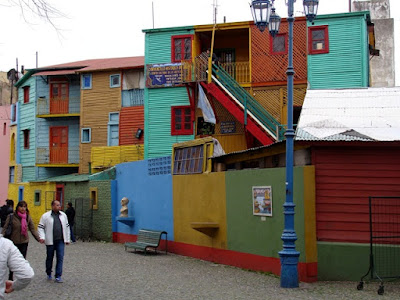 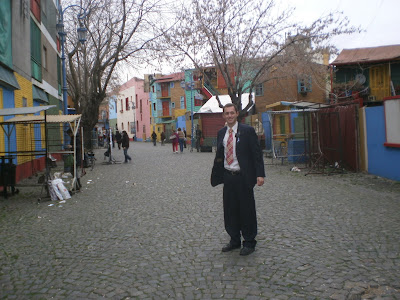 The original warehouses at the port have all been redone and Puerto Madero has been turned into beautiful office blocks and restaurants. We had lunch at Siga La Vaca. They claim to be the largest parrilla in Argentina. 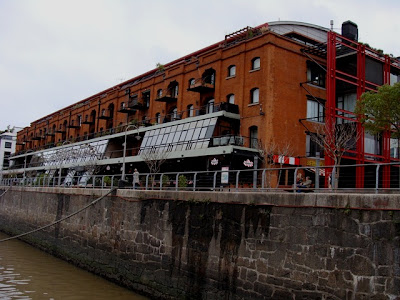 The missionaries consumed an incredible amount of food there! We walked along the dock and visited the Fragata Sarmiento. 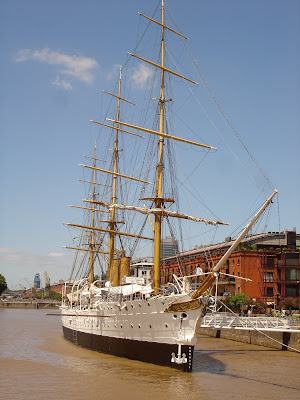 From the ship you can get some great pictures of the Puente de la Mujer, with its unusual forward cantilever. It is called the “Woman’s Bridge” because many of the streets in the district are named after women. Presidente is enjoying the day, but there are missionaries with questions to be answered, so he pauses from time to time to address their questions. 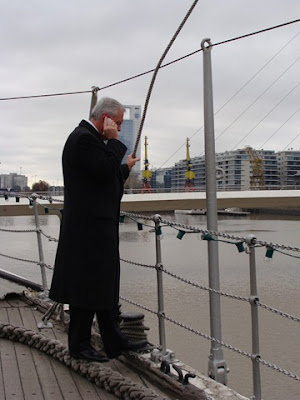 At the Parque 3 de Febrero, Presidente recounted the story of the dedication, officially opening the continent of South America to the preaching of the gospel. It was on December 25, 1925, Christmas morning, “a beautifully warm and sunny summer day.” We had our own wintery, but beautiful spiritual experience, when Elder Horrocks offered a prayer. 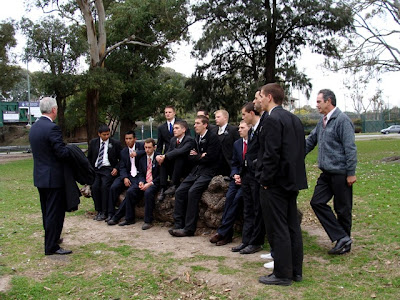 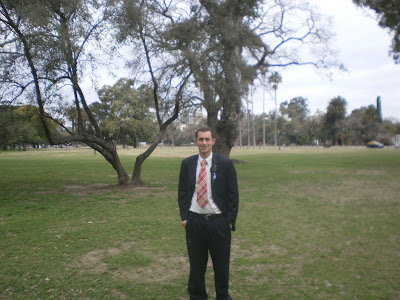 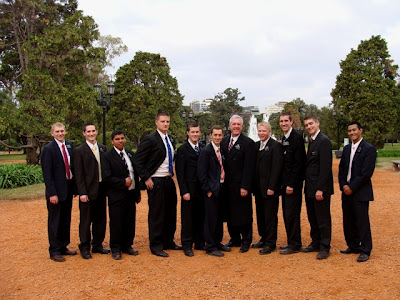 We went to the Cementerio de la Recoleta and viewed the burial grounds for the rich and famous in the country. 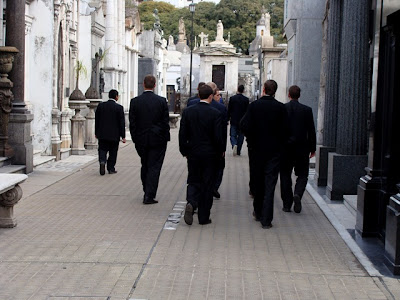 lastly, we stopped off at Freddos, probably the most famous of the artisanal ice cream parlors. 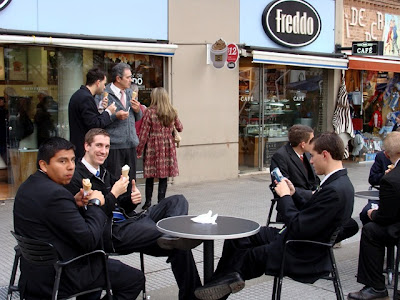 Well, This is my last email that I am sending out. This is so weird that it has ended but you know the saying, all good things come to an end. It is hard to write how grateful I am for the time I have spent here. It has really been the best 2 years so far in my life. Pretty cliché but it's the truth.

Packing my things the other night was really weird looking at all my clothes that I have used. How worn out they all are! jaja. My shirts are more yellow, socks have holes, pants have holes and are worn out a lot... wow.

Yesterday we went to the mission home and we had a nice time there. We ate some real mashed potatoes. Made with real potatoes.. jaja. Not instant! And some really good chicken. Then some chocolate cake. We just got treated really really well. We then a nice testimony meeting and rested a little. Then off to the airport with a majority of them. It was sad to see them leave but they all live in Utah so it's all good. I am staying here in the offices for a week until it's my turn to go home.

Now for my last day in Lobos. We decided to have 3 baptisms my last day in Lobos. But a miracle that happened. A really small one but it was really big for me and comp. So in Lobos we have a little swimming pool we'll say. And we fill it up with the water from the tap. So it takes a long time to fill it up. It takes 5-6 hours to fill up. So Saturday in the night we filled it up for an hour to cut some time for the next day. We filled it with warm/hot water. It cooled down a lot when we got to the church the next morning at 6 in the morning. Before we left the apartment to go to church, my comp and I said a prayer that we would have hot water for the baptism. The girls that we were going to baptize didn't want to get baptized if the water was cold. So we, at least I, were hoping for a miracle and we received one. 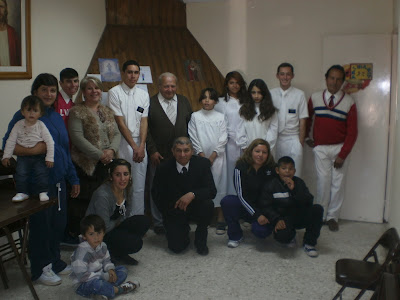 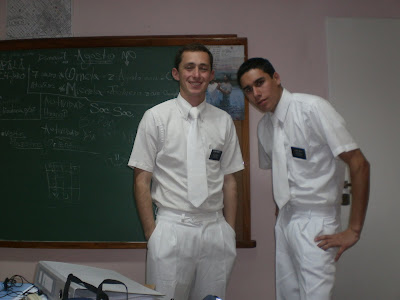 The water heater in Lobos works on a "D" battery and the battery was about dead when we started heating up the water. The battery would shut off every 5-10 minutes. So I was stressing out because the water kept becoming cold so I was worried. But I kept with the water heater during all the classes. Then during the 2nd hour, I went outside to check the battery to see if I needed to shake it again, but to my surprise it was still on after 15 minutes. I then checked half hour after and it was still on! It stayed on until I turned it off and we had hot water to have our 3 baptisms. How grateful I am for the littlest of miracles I have seen on my mission. Little stories like these I will always remember. They remind me of how much God loves us and wants the best for us. He desires to give us his best gifts. We must seek for the best gifts and not somethings outrageous.

I am grateful for all the things I have learned on my mission and am ready to apply them in my life. I can't say enough thank yous. Really I appreciate all that you have done for me. If there is something that I can do for you all, let me know and I'll tell you if I can do it jaja. I love you all and I'll see you next week!!!