What an incredible week! Being able to listen to the Prophets voice and hear inspired council was amazing. I will start off by telling how my week went. CRAZY! Monday we had normal P-day where we just chilled and I took a siesta. I always take a siesta on P-days because I am so exhausted. My companion hates the siesta. I think all Americans hate the siesta… Oh well, their loss. Tuesday we just worked like normal. We didn’t have district meeting because we were going to have interviews with the President in Chivilcoy on Thursday. But we had Elder and Hermana Henderson come and do some visits. They are Senior Missionaries who work in Chivilcoy. If you haven’t noticed, Chivilcoy is the district center. Elder Henderson is a counselor in the District Presidency. He came down and he did some visits. He also gave us his laptop to borrow for conference. That’s another thing. 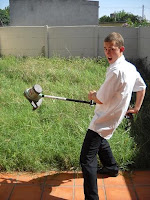 The pension needs some TLC 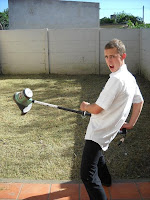 We spent our whole P-day last week looking for an internet provider that we only had to sign up monthly. That took the whole day because we had to get documents and blah blah a lot of stuff went down. We eventually got it all worked out and they installed the internet on Tuesday. So everything was working so we could watch conference. Wednesday was just a normal day. We went to the casita of a church that we have to try and see if we could connect the computer to the tv. This turned out to be harder than we thought. We had our S-video cable and everything and everything fit, but we lack just one step and I’ll get to it later. Thursday we went to Chivilcoy at 8 in the morning and got there at about 10. We had ourselves a mini zone conference and I met the new Elder that just came in last week. He is from Rigby…And when he saw my name, he said “Pickett’s Bambino, right?” And I was really surprised obviously. Come to find out, he has never had a bambino but just knows that place. Elder Hull is his name. Then I had my interview with President. I have been told that the more to the middle of your mission you get, the less President talks to you about stuff. Well, that turned out to be true. My interview went for about 7 minutes and I came out with one thing. I came out with a knowledge of the base of the Atonement. Love. But my companion had his trunky interview. They talked about schooling and life after the mission. I just laughed at him but I know that I’ll have to do that one day. Just not today. In fact, he is doing his registration for BYU right now as I’m typing this.

Once all the interviews were done, we all left for our different areas again. When we got to the bus terminal, the bus we wanted to take was full. We then realized and completely forgot that Thursday was the start of Semana Santa. Everyone was leaving. That bus was at 410. We then asked for the next bus and that one left at 630 and there were only two seats left. One on top and one on bottom. These buses are double-deckers. So we were in a funny situation. So we waited for the bus to come and 630 came around and no bus came. 645…. No bus. No bus at 7 either. 735 is when the bus finally came and there were a lot of people that got on that bus. Luckily for us, there was no one sitting in the seat next to me the whole way so my companion sat next to me. Whew! We got home at 1030 that night. A whole day doing nothing basically.

Friday we got to work on getting the TV and computer hooked together but to no avail. But to make matters worse, we couldn’t get any video feed. We worked all Friday morning on it and we didn’t get anywhere. We then had to hurry the rest of the day Friday and tell everyone that conference was going to be in the capilla and we had to tell everyone the times and tell them not to come on Sunday at nine in the morning. That was Friday. Saturday came. Yes. Conference day. The day we have all been waiting for. So we got to the church and we get on the broadcast page and there is a little note that says “If you are using Mozilla Firefox 3.6, you may encounter some technical difficulties. We suggest you downgrade to the most up to date Mozilla Firefox 3.5 (which in our case was 3.5.9)” Well, THERE was the answer to everything. With three hours to go, we got connected. Now the Computer to TV problem. We got ourselves a new adapter for the S-video cable and we plugged everything in and still the same result. Nothing. So we had to restart the computer to downgrade the internet and when the computer fired up again, something amazing happened. The computer screen appeared on the TV! AH! That’s when the mo-tab would come in with Hallelujah! Hallelujah! Hallelujah! Something like that. But we finally got everything to work. We hooked up the sound to our sound system that we already have for the microphone and it sounded marvelous. And then the moment we had all been waiting for… CONFERENCE!! YAHOO! 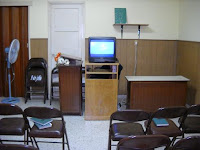 This is how we watched general conference
Conference starts here at one o’clock. So we started the transmission in Spanish and after half hour, no one showed up. So we switched to English. No one showed up for that session of conference. Wow. It was really sad. The afternoon session started at 5 if you do your math right and we had us and three other people. Pathetic. One of them was Virginia who is an investigator that is practically a member. She is awesome. And we didn’t watch Priesthood session because we didn’t think that they broadcast that on the internet. So everything went well as far as the technical stuff. My companion and I were really happy that we got to listen to conference.

There was a lot of great counsel to the members as far as responsibilities. President Packer talked about a priesthood holder in the home. Elder Ballard talked about Mothers and Daughters and the relationship they must have. I don’t have my notes with me but there were a lot of stellar talks. And hearing it translated in Spanish was pretty cool. Some of the apostles translated their own talk and I could understand their Spanish a little better. I understood a lot so don’t worry. I know what each of them said. Sunday we had 14 people show up for conference both sessions. A very small amount of the branch showed up which is very disappointing. But you do all that you can to get everyone there and then it’s up to them.

Thank you Big Mark and Rosie for your email. Thank you Marcos and Sophia for your wonderful letters. I really do appreciate your letters. I love hearing from my brother and sisters. Andi and Sara still have time to make up for the letters they have not written. TIA CUI: SÍ. I would love to get more letters. Thank you for your letter also. I love hearing from family. It is a great comfort to know that one has support at home. As was the theme in my opinion for conference, stay strong in the home and stay close as a family. I love you all and thank you for prayers for me and other missionaries.

Love
Elder Pickett
Posted by rpp at 7:41 AM