Another week come and gone. Time flies so fast out here. We are in the last week of the transfer meaning week number 6. I can’t believe that I have already been here in 9 de Julio for 5 weeks. I have really come to love the people out here in 9 de Julio.

So like I mentioned last week, we have a family night with President Benton and our little Rama. We had a lot of people show up. And when I say a lot, I mean like twenty. We had a great time. President did a presentation of a subject that is very tender in 9 de Julio. Finding the “one”. He talked about finding the person that needs our help the most. The person who has been struggling coming to church or keeping the commandments, etc. It was a really great lesson for the people that showed up. Then we ate choripan con chimichurri. Oh man, that is my favorite meal hands down! 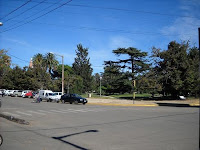 (View of the plaza downtown)

But while we were eating, someone showed up that we really wanted to come. It was one of our investigators named Virginia. She showed up with her daughter Sophia and with someone who we really really wanted to attend. There is a man by the name of Ruben who for 15 years now has been excommunicated. He was branch president and was a great leader. But he has been showing signs of wanting to come back. But the reason why I bring this up is because they, Virginia and Ruben, are together and are not married. Virginia can’t get baptized until they get married. She has a testimony and knows the church is true. She has read mormon.org like 5 times over. She has probably seen dad’s face in there once or twice. Jaja. But she is just great. And so they arrived at the NDH and it was really fun. President talked with Ruben about coming back and about coming to church every Sunday. It was a great talk that they had.

So now fast forward to Sunday. Yesterday it rained, and it rained, and it rained. We had a grand total of…. 17!! In sacrament meeting. That is an overwhelming number. I don’t know about you guys but wow! Chiste. I had to teach primary and jovenes (young people). It was interesting. The primary presidency didn’t show up. The Relief Society President didn’t show up. So my companion taught Relief Society and I taught the young people. Crazy! But it was fun. And the best part was that Ruben showed up with Virginia and her daughter despite the rain. We are so happy. We are hoping they get married soon so that she can enjoy the blessings of being a member and having the Holy Ghost with her. That is all the exciting stuff that happened this week.

This week was kind of a relaxed week, but not really. Never can we relax in the mission. Jaja. The mission has become a norm. So I prepared a lesson for the youth this week and I didn’t get to teach it so I’ll sum it up cause I don’t have much time left. Basically, I focused on Joseph forgiving his brothers. He forgave his brothers because of the blessings that he realized came from it. If he had not gone into Egypt, his family would not have had food because Joseph gave them food. He would not have been able to interpret those dreams and so on and so forth. It’s a sequence of events that He got blessed with. Basically, in the end there are scriptures that explain what we need to do. In DyC it says, "I the Lord forgive whom I will forgive but of you it is required to forgive all men." Well, that’s really clear. Forgive all men. Punto.

But the ultimate example of forgiveness is in the New testament when Jesus is on the cross. He says, Father forgive them, for they know not what they do. That is the ultimate example. How can we not forgive others after hearing that. He is hanging on the cross ready to give up the Ghost and he takes the time to forgive all because they didn’t know what they were doing. I challenge everyone to forgive everyone of their trespasses. At times it may be hard but think of the sacrifice the Jesus made for us. The price He paid for us so that we can be free. I am grateful for the sacrifice that He made for me. I am glad to have the knowledge that through his infinite atonement, I can live with my Heavenly Father again. These next couple of weeks, let us think on the great sacrifice and resurrection of Jesus Christ, our savior. Being Easter and such I would think it would be appropriate.

So thank you for destroying my house! And putting it back together. The remodel looks so nice. Christian, I am so proud of you for turning in your papers. Get prepared to come to Argentina Buenos Aires West! Haha jk. That would be pretty cool. Thank you everyone for your support and prayers. The work down here is great. We have a baptism this weekend for Victoria (14 yrs old). Our branch is slowly but surely getting better. Poco a poco we like to say here. Well gotta go. I love you. Write back sometime…. Haha

Elder Pickett
Posted by rpp at 8:35 AM